Menu
Log in
Register
Install the app
You are using an out of date browser. It may not display this or other websites correctly.
You should upgrade or use an alternative browser.

Gold Level Sponsor
The May calendar pic is my 1963 series III GT.
I've always admired older British sports cars but never thought I had what it takes to maintain and take care of one.

Five years ago I met a gentleman who owns/collects older unusual British convertibles mostly from the Rootes group. He likes to take them all out together to local car shows every month or so, and I became one of his regular additional drivers. This Sunbeam was one of his cars that he bought as a package deal to get some other cars that he wanted. It quickly became my favorite. I wound up storing his car in my garage for a couple years when he ran out of storage space, and part of the agreement was that I could take it out for regular drives to make sure it didnt sit too long unused.

Two years ago the gentleman decided he wanted more unusual cars than the Alpine in his collection, and made me an offer on it I couldnt refuse.
Since that time, I've been thru one long round of ignition related problems that I eventually figured out (damaged rotor, cap and pertronix), fixed a broken turn signal switch, and replaced and upgraded a handful of other parts, but overall the car is a really nicely trimmed out driver that looks really good until you get too close. I hope to keep it a good long time!!

This pic was one from a photo shoot last year bringing together old British cars, modeling students, and a photographers class.. a fun experience for all. 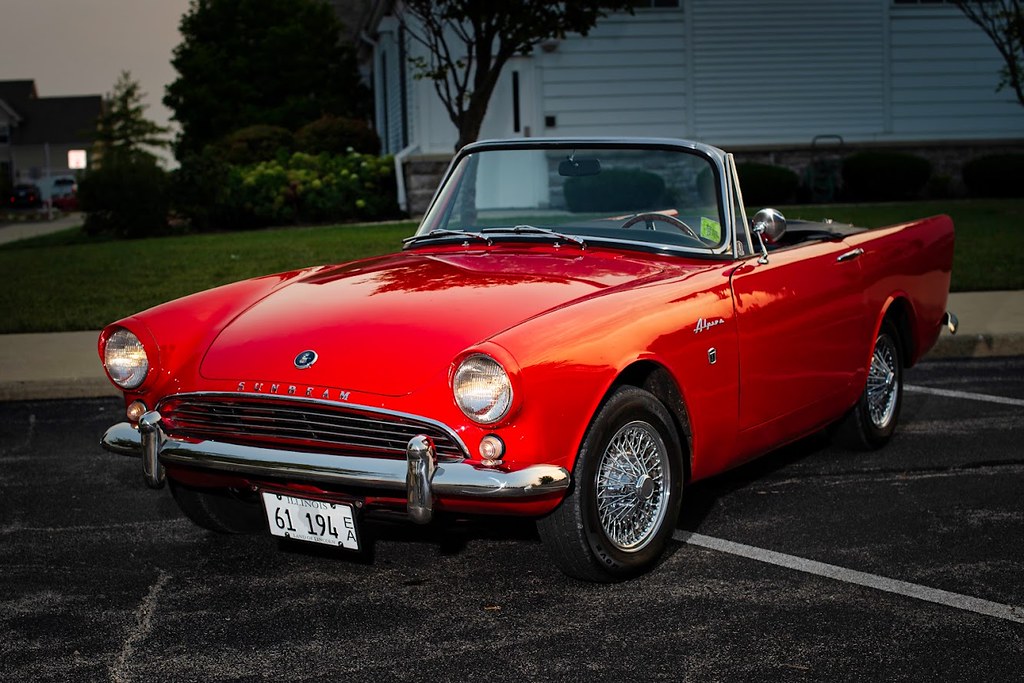 Diamond Level Sponsor
Nice looking car and great story on how you got it. Alpines aren't all that hard to keep and this is the best place
to be when you own one! Glad your car was chosen for the calendar!!
A

Donation Time
Miss May is a lovely looking car. Nice stance and clean lines, and they are easy cars to keep with a bit of love and regular use!

Platinum Level Sponsor
Yep, Barb and I are the proud owners of "Judy", Miss June. We bought her in 2020 during the pandemic. I learned of her for sale on Bring A Trailer. At the time, the bidding was stalled at 3700 dollars. I knew she would bring more, but thought that I could go as much at ten grand for such a beautiful car and she was located just 50 miles away! I showed it to Barb and we made an initial bid of $7500. Soon afterward, I got a call from Judy Sharkey, wanting to know if I had bid on the car. She liked it, but would not bid against me. I told her I appreciated that feeling, but if she wanted the car more than I did, there would be no hard feelings. Fast forward to the final fifteen minutes of the bidding and we were outbid, but the price was still below $10,000. I logged on to bid and immediately lost our internet connection! We got on the phone, called Judy and she agreed to bid for us. She would run it up to $10,000 for us, then higher for herself and Bob. We won the car at $9500 (plus BAT's share) and immediately decided we would name the car Judy in honor of that wonderful, unselfish woman.

We drove Judy to the SUNI at Independence where the photo was taken by an unknown photographer. She made the trip in fine fashion. But we have "improved" her. The wheels and tires, while beautiful, were totally unsuited. The tires rubbed the inner fender on any bump. The tires in the photo are Saab wheels and tires we had on the Duratec powered car. They were installed mostly out of curiosity and worked fine. However, we have switched back to original 13" wheels with 175 tires for a better ride. The original carb (CD 150) was replaced with a S&S knockoff carb for better performance. The car was "finished" by the seller to make it look good. Wipers, windshield washers, heater, fuel gauge, seats, outside mirrors, seat belts, speedometer and window cranks all needed attention. That list has been whittled down, but She is still very much a project. Judy was purchased as a comfortable long distance car. She has not fulfilled our expectations and currently is mostly a garage queen which we drive to car shows, the latest being the South Carolina Invasion.

My experience with Alpines goes back to September of 1963, when I purchased a new "1963" Alpine, my first car. The car was an early Series II with overdrive, and had a grease gun in the tool kit which means it was probably one of the first Series II Alpines. I put 45,000 mile on it, then traded it for a new Rambler in 1969, as I needed dependable wheels that could deliver a lot of trouble free miles, something the Series II was not doing. But I always had a soft spot for Alpines. Once again, we will fast forward. This time to 1995, when Barb was wanting to buy an abdominal workout device. They were very expensive when new, so I picked up a Trader paper, purchased an Abominizer for $45 and saw a 1965 Alpine, which we purchased. So began my modern Alpine affliction, aided by a wife who loves top down motoring and Alpines.

Diamond Level Sponsor
I bet there is much, much more to this "Story" Maybe we will hear more some day,
B

DanR said:
I bet there is much, much more to this "Story" Maybe we will hear more some day,
Click to expand...

Yes, guaranteed to put any audience into a permanent stupor. Fortunately, I have forgotten most of it.
Bill

Diamond Level Sponsor
I am posting this for Bradly F who has since sold his August calendar car but wanted to share more info about it.


"My interests in Sunbeams started in the late 60's when I had a 1959 Alpine. It was a fun little car but overheated constantly; so I parted with it. Then in the mid '80's I visited my friend in Colorado who had a Tiger and he even let me drive it. He was President of a Tiger Club in Colorado and his Tiger was very nice. Years past and I had jumped at the opportunity to purchase my '67 Alpine sight unseen from California. I had it shipped to Indiana and, once here, I drove it around the block one time and immediately commenced to pull the engine and transmission to be replaced by a built 2.8 V6 and 5 speed. Once installed and running I knew I had made a good choice as it bumped the fun factor up considerably. After a nice paint job, interior work, and Hardtop, I took it to a few car shows where it won best in class. As life has those unexpected twists and turns; I had to sell it; but still have fond memories ."

Diamond Level Sponsor
Bradly is an olde Hot Rod'r, very talented in many ways. He handcrafted a fine piece of craftsmanship in the form of a Sunbeam out of wood and presented me with it as a gift.

I shall cherish it with fond memories of my Sunbeam Friend.

He utilized my conversion components for his beautiful Alpine V6 Project.

Silver Level Sponsor
Imagine my surprise when I received a message from Eric a couple of weeks ago, congratulating me on my car being the December calendar picture! As a silver level sponsor, I had no idea that the picture I had sent in all those many months ago had been chosen!
I first fell in love with the Sunbeam Alpine when I was in junior high. A friend of my older brother had one and I had a couple of rides (sitting crosswise in the back seat). I still remember squealing tires around the corners and an awesome exhaust note. Later on, after I purchased my Alpine, I was telling my brother about my memories and he informed me that it was actually a Tiger, which makes sense now! Either way, an English sports car in small town Alberta in the mid seventies was a rare sight.
I purchased my Alpine in the summer of 2019. It was an older restoration. The body and paint was in excellent driver quality condition. The mechanical condition was less so. The head gasket was leaking, it was overheating, brakes pulling to the right, mis-matched carbs, and a 4 speed tranny with a 4.55 ratio diffential out of a Rapier. 4200rpm=55mph!!
That winter, the engine was pulled, the head was skimmed, I did the Vizard mod and lapped the valves. I got my carbs matched up and new throttle shafts installed (Thanks Bernd!). I pulled the frost plugs to check for blockages, but all was clear. I fabbed up a fan shroud, put the fan back on (right way around this time!), the rad had already been recored to a three row. I installed an OD transmission and 4.22 gears in the rearend, new wheel bearings and seals all round, rebuilt calipers and installed new brake lines up front. I got my distributor rebuilt and recurved by Jeff at Advanced Distributors, machined the flywheel to the Lemans 1600 profile, pulled the carpets and put down a layer of Kilmat to help with heat and noise. Other odds and sods were done as well, LED lights, rebuilt heater fan, u-joints, new throw out bush and clutch disc etc.
My 'Beam runs sweet now and is a joy to drive. I still want to put in 3.89 gears for better cruising, and an Alpine Innovations manifold and carb, but it's not a high priority,
The best thing about the car is the smiles it brings. Whether it's passengers or passers-by, you get more smiles-per mile in an Alpine.
My car has been in photo shoots, wedding pictures, and even a music video. And now it's on a calendar!

I would be remiss if I didn't thank all the members of the forum. I have spent hours reading posts, both old and new, and just about every question that I have had, has already been asked and answered. Any interactions I have had with people had been overwhelmingly positive. Retirement is looming for me in the next couple of years and I look forward to attending a Sunbeam Invasion and meeting some of the people behind the avatars.

Merry Christmas and all the best in the New Year!

Diamond Level Sponsor
Thanks Collin for sharing your Alpines story and more photos too!
Below is the calendar with your car featured. When I get the 2023 calendars I will send you one along with the 2022 one as well.
I like how the white porch railing reflection looks like a wrap around racing stripe on your Alpine

Diamond Level Sponsor
Aaaaand.... it looks like I got the small December photo spot. Nice! Thanks, guys!

They're hot off the presses. We just need to get the Diamond and Platinum certificates sorted, and after 23 trips to the post office for Eric, they’ll be on their way. I wouldn’t start checking the mailbox on Monday or Tuesday, but soon.
You must log in or register to reply here.
Share:
Twitter Reddit Pinterest Tumblr WhatsApp Email Share Link
Top